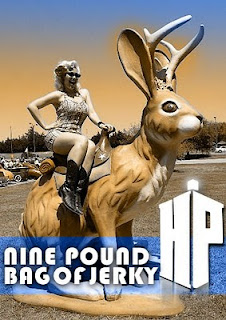 Tara is on the road, Nancy A is in San Francisco being cool, and Lela S is about to enter the world of CLASSIC WHO.
Meanwhile back in Orlando, Uncle Lew is learning how to cook a frozen pizza.
Turkey Jerky, highlights from Gally, drinking stories, remembering Nicholas Courtney,
The SPECIAL EFFECTS of The War Machines, and Doctor Who news.

It's a fun time for all and we have enough jerky for everybody!

Posted by The Happiness Patrol at 8:11 PM No comments:

Shameless self promotion instead of our regular podcast.
As many of you already know, Tara W. has a wonderful Tardis. Earlier this month
she hauled it from her home in Albuquerque, New Mexico to Los Angeles, California for the
Gallifrey One Doctor Who Convention.
As you might ALSO know, The BBCA is having a little competition called 'Where's The Tardis'
where people can go and show off their 'Pizza Tardis' or 'Snow Tardis' (go Sherri) or...

if you are nuts like Tara and myself,
your self built, full size Tardis!

There are a certain number of rules that need to be followed in order for the contest to be won,
but, the biggest factor here seems to be the number of votes a Tardis gets.

This, good people, is where you come into play.

Follow this link and click on the 'LIKE' button and cast your vote for Tara's Tardis
and make The Happiness Patrol just a little more HAPPY!

Here are a few videos of her grand Blue Box.


From Gallifrey 2009...This video is from the first time I met Tara and David.


Tara and her Tardis on Craig Ferguson.
very cool.

So what are you waiting for??? Go vote for Tara and her beautiful Blue Box.

Lewis B.
Posted by The Happiness Patrol at 7:06 AM No comments: