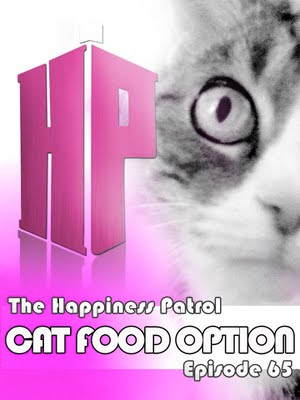 Hello, and welcome to The Happiness Patrol.
It's the un-official start of summer here in the states as we record this episode on Memorial Day.
So pull out the hot dog buns and fire up the grill, cuz this week's HP has
'out-of-school-hit-the-pool-go-to-the-beach' all over it as we goof off on
The Almost People.
Rock on.

Posted by The Happiness Patrol at 6:25 PM 3 comments: 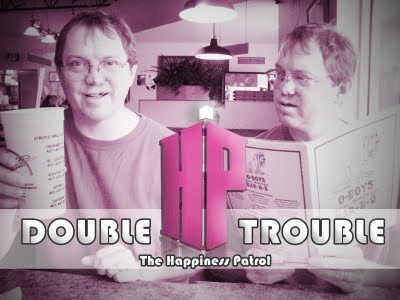 Welcome to another fun filled adventure in Skype, Doctor Who watching, and podcast production also known as THE HAPPINESS PATROL! wooo-hooo!

This week, Tara, Dale, Lela, Nancy and Lew take on the task of OPINION SPOUTING about this week's 'The Rebel Flesh'.

TEN YEAR OLD TONY joins us for a short time, and speaking of the young and young at heart, we welcome lil George Naughton into the world!
(can ya stand it??)

All this and more this week on...

Posted by The Happiness Patrol at 9:53 AM 3 comments:

The Way You Watch Doctor Who

I wanted to share this with everyone who listens to our podcast...it's a very well written piece by our very own Dale Who.
Read and ponder.
-Lewis B.

My View of Who.
I've been getting increasingly annoyed, upset and angered by Doctor Who fandom recently nit picking, moaning and whining from the beginning of episode one of the new series. It's gotten to me in a way I didn't think it could; so I decided to look at what makes my view of Doctor Who - which is usually glowing and happy - so different from those fans - in many cases friends and peers; and I've figured out what it is.

And so when I sit down and the continuity announcer comes on just prior to the show, everything changes. The whole ball game. Nothing interrupts Doctor Who. And should anything manage to, the level of irritation and anger felt is that of a cheated six year old. Completely out of proportion to having a TV show interrupted; but entirely in keeping with someone getting in the way of me spending time with my hero.

I watch every new Doctor Who as a kid would. Completely entranced, and following what The Doctor's doing intently. I stare and laugh and gasp and jump in all the right places, and don't see what others point out about effects or plot holes or anything else. My hero's on and it's him I'm interested in. And when the episode's done... it's automatic for my brain to remember that it was an amazing 45 minutes because it's time I spent with my Doctor.

I've had to stop watching Doctor Who Confidential as it's ruining the main programme for me. Little inner Dale isn't in the slightest bit interested in how which effect was done, or whether Mr Guest Star got unexpectedly concussed when a dolphin felt out of the sky in Utah and smacked him in the head. He's got bigger concerns about Amy, River, Rory and The Doctor, about whether the TARDIS is alright and that evil's been defeated for another episode.

By the time I'm on repeat viewing number three, inner Dale has gone back to wherever it is he goes when his heroes aren't on and I can see the show as a show again. But this isn't *just* in play for Doctor Who. Superman gets the same response, as do Batman and Wonder Woman. You criticize them and you wake a sleeping monster; an over-protective hero worshipping kid who can't see that views are subjective; to him you're being rude about his heroes, and that isn't tolerated.

But it goes further than that, too. I can't watch the scene in Superman Returns where Lex's thugs beat the crap out of Superman on the island made of Kryptonite, and Lex stabs him with a shard of the green rock. It upsets me far more than it should. Someone is hurting one of my heroes. Batman having the snot beaten out of him by Bane. And the whole opening sequence of the DC Online game where Lex and the Joker manage to kill Batman, Wonder Woman *and* Superman leaves me reeling and in shock. It's not even something I get used to.

On the flip side though is the amount of pure unadulterated joy this brings, which far, far outweighs the down sides. Doctor Who, when it's new and I've not seen it before is an almost religious experience. The amount of joy that an episode brings is almost unequalled; the same with my other heroes. It comes before all but two things. They being my Mum and my Dad. They're more important to me than anything else on this planet... because, like any kid will tell you they're your heroes, your protectors, your safe place when all else fails.

I wanted to get this down, to give people a clue as to why I'm SO protective of The Doctor and Co, and why it seems I'm scarily obsessed with them. It's because I love them with the degree of love my inner child thinks is appropriate... and as with most kids and their heroes, that's total, unconditional, and everlasting. 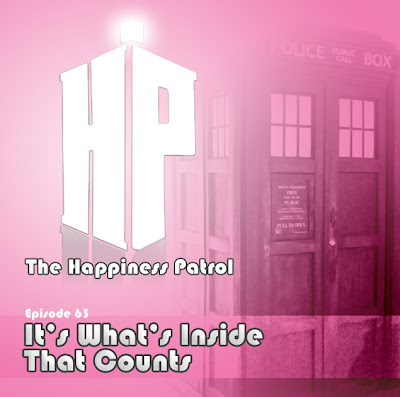 It's What's Inside That Counts....it really is. And that's what we learn, or more correctly, already knew about the Doctor's Tardis, right?
This week on The Happiness Patrol, Lewis, Dale, Lela, Tara and Nancy take a look at 'The Doctor's Wife'.
It's a good one, and it deals with a subject near a dear to our hearts...
The Tardis

PLUS, 'Ten Year Old Tony' is back to give us his take on The Doctor's Wife.

So grab a drink, sit back and get TRANSCENDENTAL this week
on The Happiness Patrol

Posted by The Happiness Patrol at 7:09 PM 2 comments: 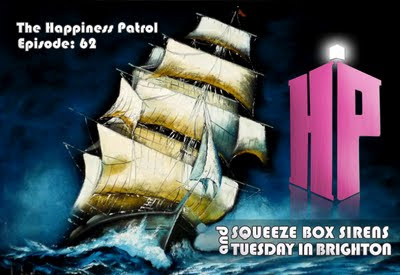 We got a real live Mermaid on The Happiness Patrol this week! Medusirena The Fire Eating Mermaid drops in to hip us on what it takes to be a real mermaid...
AND Dale gets to meet her!
AND 'Ten Year Old Tony' is back!
AND everybody's happy and singing! (Well, not EVERYBODY, but most of us!)

So AHOY there Matey! Sit back and relax as Lewis, Dale, Tara, Lela and Nancy SHOVE OFF FOR ADVENTURE ON THE HIGH SEAS and all that garbage this week on 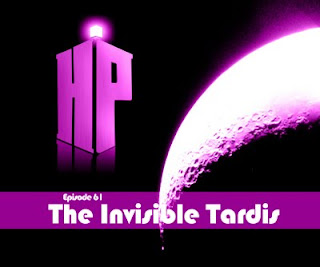 This week on The Happiness Patrol, Lewis B, Nancy A and Tara W tackle the task of discussing "Day of The Moon".
In helping the adults understand what the heck is going on, 'TEN YEAR OLD TONY' drops by to put in his two cents! Surely during the rest of the season we'll be counting on him to point us in the right direction and keep us on track!
Nixon, Apollo, and fake central Florida intersections all on this week's edition of your favorite Doctor Who Podcast, The Happiness Patrol!

Posted by The Happiness Patrol at 7:18 AM 2 comments: