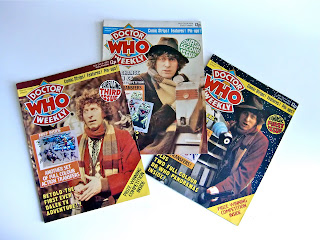 Congratulations to Melissa Ray Davis our Happiness Patrol Contest Winner!
Melissa's entry came the closest to the way Steven Moffat crafted 'The Big Bang'.
She wins the fab prize of the first three issues of 'Doctor Who Weekly' from 1979!

All of our entries were tons of fun to read, but with Melissa's mention of the Doctor timestream jumping, Dale and the rest of us decided she came the closest!

Here is my guess for your contest as to how the season finale will resolve:

In "The Big Bang," the Doctor will cross his own timeline into the
events of previous episodes in order to plant several seeds to change
the future. Two of these trips will be to Amy as a child (Eleventh
Hour) and to talk to Amy during the events of Flesh and Stone. These
trips make it possible for Amy to do something at a key moment that
will either:

cause the TARDIS never to explode and the cracks never to happen,
creating a time loop / paradox that will save the universe.

or cause the reality that was created from Amy's memories (Pandorica,
etc.) to break down.

I believe we already saw one of the Doctor's trips across his own time
line in Flesh and Stone. When the Doctor comes back to comfort Amy in
the forest, he is wearing his jacket. The jacket that the angels have.
The jacket that isn’t in any other forest scene. I think this was a
future Doctor. And he stresses that Amy must trust him, and must
remember what he told her when she was 7, which I think may have been
something future him told her in a scene we haven't seen yet. See my
screen caps here:
http://www.fallingstar.net/host/tardis/doctors_jacket_in_flesh_and_stone.html

Bonus: The Doctor and River's relationship will progress to something
more definite/defined.

That's my theory. Oh, and for the record, as per your query in the
last podcast, I am one "fan girl" who would prefer that the Eleventh
Doctor keep his towel on, thank you. (Between him and Pertwee, I think
we've seen enough of the Doctor showering!) :-)

Melissa, those Doctor Who Weekly's are on there way!
Congrats and thanks for listening to The Happiness Patrol!

Lewis B.
Posted by The Happiness Patrol at 6:22 AM